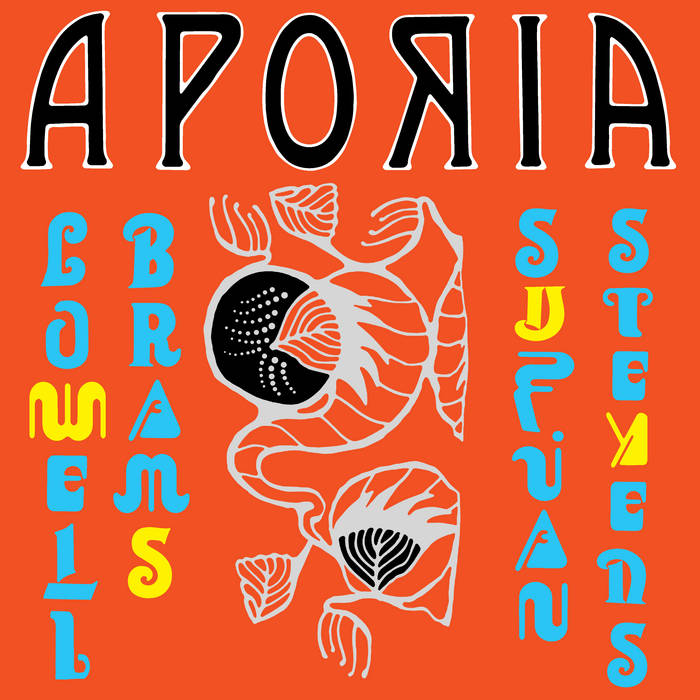 Adam Bates A New Age is needed in a time where nothing happens. Favorite track: Ataraxia.

Music For Insomnia was an entire album of drones, dissonance and queasy synth squelches replete with titles that referenced various sleep aids and disturbances. It’s a heady footnote in the AKR catalog but not a tent-pole record.

Sufjan and Lowell never stopped making music together. After over 10 years without a co-release, the music on their new,mostly instrumental album Aporia is everything that Insomnia is not. Where Insomnia alienates, Aporia charms. Where Insomnia is frivolous, Aporia’s 21 tightly crafted songs resonate with a gem-like intensity.

In the spirit of the New Age composers who sanded off the edges of their synths’ sawtooth waves, Aporiaapproximates a rich soundtrack from an imagined sci-fi epic brimming with moody, hooky, gauzy synthesizer soundscapes. The album may suggest the progeny of a John Carpenter, Wendy Carlos, and Mike Oldfield marriage, but it stands apart from these touchstones and generates a meditative universe all its own. Aporia is no mere curio in Sufjan’s catalog – but a fully realized collaborative musical piece.

This realization as an album required a long gestation period. After their first record, Lowell and Sufjan continued their music-making – certainly for the pure joy of it but also with an eye towards another possible release. When Lowell would fly out to New York for visits, the two would set aside time to jam, tracking hours and hours of music — all the while putting off the editing of the raw material. Though they could have easily made a follow-up to Insomnia, Sufjan instead suggested that together they create something more inviting, a project that he could shape more intently. Sufjan proposed producing the sessions by first unearthing the choicest moments from their improvisations, and then shaping those moments into full song structures. The process wasn’t easy. Sufjan says, “You know how it is with jamming: ninety percent of it is absolutely horrible, but if you’re just lucky enough, ten percent is magic. I just kept pulling out these little magical moments.” He then enlisted an Asthmatic Kitty Records “who’s who” of collaborators to add vocals, drums and additional instrumentation. The players include Sufjan’s long term drummer James McAlister (The National), Thomas Bartlett (Doveman), keyboardist and trombonist Steve Moore (Sunn O)))), D.M. Stith, Nick Berry (Dots Will Echo), John Ringhofer (Half-handed Cloud), guitarist Yuuki Matthews (The Shins), and vocalist Cat Martino.

After receiving contributions, Sufjan and Lowell agreed on the general feel of the album. But the project still needed a final push to completion. When Lowell announced his retirement from the label this year, Sufjan had his impetus.

Here’s a bit of relevant background: When Sufjan was five years old, Lowell married Sufjan’s estranged mother Carrie. Lowell encouraged her to have a more integrated relationship with her children and so the couple hosted the kids in Eugene, Oregon over a few magical summers. The Stevens children would descend on Lowell and Carrie’s home and spend the days and nights listening to records, hiking, playing Legos, watching scary movies and reconnecting with their mother. During that time Lowell’s encyclopedic knowledge of music and infectious fandom began to braid his and Sufjan’s lives together. Lowell saw a young boy who had nascent talent for music and a hunger for new sounds, and Sufjan’s ears were opened to the craft of The Beatles, Nick Drake, Bob Dylan, Mike Oldfield, Judee Sill, and Love. Lowell and Carrie split up after a few years but when Lowell moved back to Michigan to take care of his ailing parents, he ended up living close to the Stevens’ Michigan home and continued his relationship with the family. Lowell encouraged Sufjan’s interest in music, giving him mix tapes that would prove key to his musical development. “The fact that I had this lifeline to something that was creative and beautiful was crucial,” says Sufjan, “Lowell would give me the tapes. They were mine. When you’re in a large family, everything is shared. To have these tapes, and a Walkman that I could listen to on my own. It was huge.”

Lowell and Sufjan became close friends, but more importantly Lowell was, as Sufjan says, “a literal father figure,” encouraging Sufjan’s talents in ways big and small. Lowell loaned Sufjan his first keyboard (a Korg Poly-800, with a pair of AKG headphones) and bought him his first 4-track cassette recorder. Lowell would help out at early gigs —when Sufjan played recorder and guitar in the college band Marzuki—driving, schlepping gear and just being a positive, encouraging presence. After Sufjan recorded his first solo album A Sun Came, in 1999, (as a senior project for a college Pro Tools class) Lowell founded the record label Asthmatic Kitty Records and fronted the cost of a thousand CDs.

From those humble and ad hoc beginnings, Asthmatic Kitty Records grew alongside Sufjan’s successes. For the last 20 years Lowell shepherded the label from his home in Lander, Wyoming, giving a context and platform for Sufjan’s work. Lowell decided to retire from the label in 2019, giving Sufjan the incentive to carry Aporia across the finish line.

“This record definitely marks Lowell’s retirement,” says Sufjan, “but it tells a bigger story of stewardship and mentorship. He’s been there since I was five. It’s been a long haul. Even though Lowell doesn’t have any trained musical ability, he’s been a huge inspiration to me, both as a mentor and a scholar of good music. He has a great ear and great instincts. His self-education in music and the sharing of that with me helped me create a context for what I do and how to take it seriously. This music, and our relationship, and the business we’ve created – it’s all quite meaningful as a whole. This record is a synthesis of all of that history – it’s a reflection of the ideology that’s got us through this life, a do-it-yourself co-collaboration.”

In terms of the album’s deeper meanings (“aporia” is a philosophical term that means “an irresolvable contradiction”), one could easily hear this music as a soundtrack to a heady Igmar Bergman film that seeks to answer life’s insoluble questions: Who Are We? Why Are We Here? What Is The Meaning of Life?

You can hear these questions, and the echoes of Sufjan and Lowell’s years together, in the tracks redolent with the B-movie soundtracks and wild experimental albums over which they bonded. Tracks like “Agathon,” “Afterworld Alliance” and “The Runaround” feel like unrecorded fantasy jams between Giorgio Moroder, Vangelis and Tangerine Dream. “Eudimonia” sounds like a sister track to New Order’s “Elegia” and there is a reference to their shared musical hero in the miniature “For Raymond Scott.” These themes emerge naturally from the palette of the sessions. Sufjan says that Aporia, “is an homage to the beauty and depth of analog sound, and how it can evoke deeply felt human emotions.” He also considers the album a “thank you” to Dave Smith – the designer of the Prophet 5 [and founder of the synth company Sequential]. “Almost everything we used is a Dave Smith instrument,” Sufjan says, including the Tempest drums, The Prophet 08, The Prophet 6, and the OB-6, which Sufjan says “all have otherworldly qualities that give the album an emotional sci-fi character.”

Lowell is humble when discussing his own contributions to the record. “It’s unusual to have someone with little or no talent collaborating with someone who’s got truckloads like Sufjan,” says Lowell, “It’s unusual but it’s fun. It’s not an album that he would make on his own and it’s not one that I could make on my own. But we did it. I’m proud of it. It’s exciting to put out an album with Sufjan’s name on it as well.”

The album’s epigraph by Eubie Blake is apt, “Be grateful for luck. Pay the thunder no mind. Listen to the birds. And don’t hate nobody.” Sufjan and Lowell feel the luck and fortune of their relationship, and from that fortuitous relationship arrives Aporia, the perfect musical accompaniment, released, of course, on Asthmatic Kitty Records.