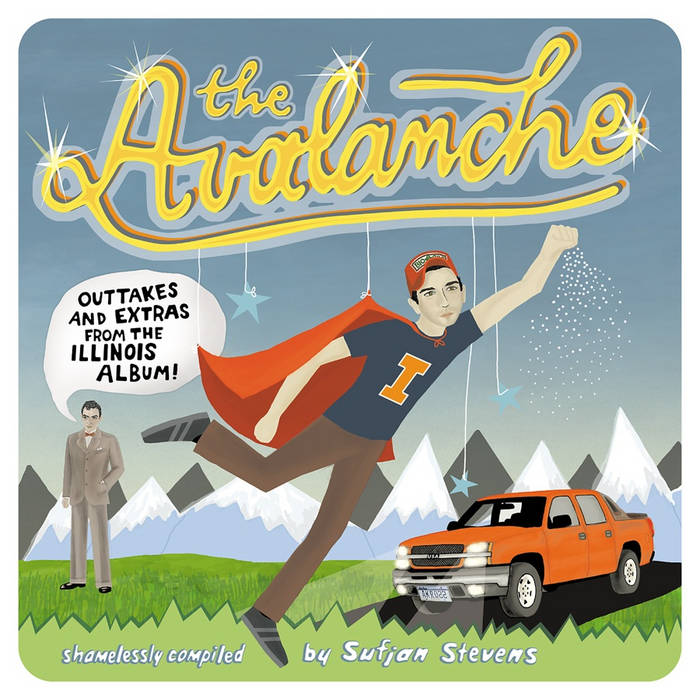 yankee_in_stalins_court Sufjan's music never fails to take me back to being a kid and spending long summer afternoons painting with my father or listening to him play guitar. Despite only discovering Sufjan's music less than a year ago, there's something so unique yet nostalgic about his music that always makes me happy. Thank you! Favorite track: The Henney Buggy Band.

Adam Bates "I can talk back to you now, I know; from a few things that I learned from this TV show." Favorite track: Pittsfield.

The little secret behind the Illinois record is that it was originally conceived as a double album, culminating in a musical collage of nearly 50 songs. But as the project began to develop into an unwieldy epic, common sense weighed in—as did the opinions of others—and the project was cut in half. But as 2005 came to a close, Sufjan returned to the old, forsaken songs on his 8-track like a grandfather remembering his youth, indulging in old journals and newspaper clippings. What he uncovered went beyond the merits of nostalgia; it was more like an ensemble of capricious friends and old acquaintances wearing party outfits, waiting to be let in at the front door, for warm drinks and interesting conversation. Among them were Saul Bellow, Ann Landers, Adlai Stevenson, and a brief cameo from Henry Darger's Vivian Girls. The gathering that followed would become the setting for the songs on The Avalanche: Outtakes and Extras from the Illinois Album.

Sufjan gleaned 21 useable tracks from the abandoned material, including three alternate versions of Chicago. Some songs were in finished form, others were merely outlines, gesture drawings, or musical scribbles mumbled on a hand-held tape recorder. Most of the material required substantial editing, new arrangements or vocals. Much of the work was done at the end of 2005 or in January the following year. Sufjan invited many of the original Illinoisemakers to fill in the edges: drums, trumpet, a choir of singers. The centerpiece, of course, was the title track—The Avalanche—a song intended for the leading role on the Illinois album but eventually cut and placed as a bonus track on the vinyl release. In his rummaging through old musical memorabilia, Sufjan began to use this song as a meditation on the editorial process, returning to old forms, knee-deep in debris, sifting rocks and river water for an occasional glint of gold. "I call ye cabin neighbors," the song bemuses, "I call you once my friends." And like an avid social organizer, Sufjan took in all the odd musical misfits and gathered them together for a party of their own, like good friends.

A careful listener may uncover the obvious trend on this record: almost every song on the Illinois album has a counterpart on the outtakes. Carl Sandburg arm-wrestles Saul Bellow. The aliens landing near Highland salute Clyde Tombaugh, the man who discovered Pluto. The loneliness of "Casimir Pulaski Day" deepens even further in the foreboding soundtrack to "Pittsfield." At its best, The Avalanche is an exercise in form, revealing the working habits of one of the most productive songwriters today. As an illustration, the avalanche refers to the snow and rubble that falls off the side of a mountain, or, in this case, the musical debris generously chucked from an abundant epic. It's unlikely you'll find a mountain in the Prairie State so the metaphor will have to do.